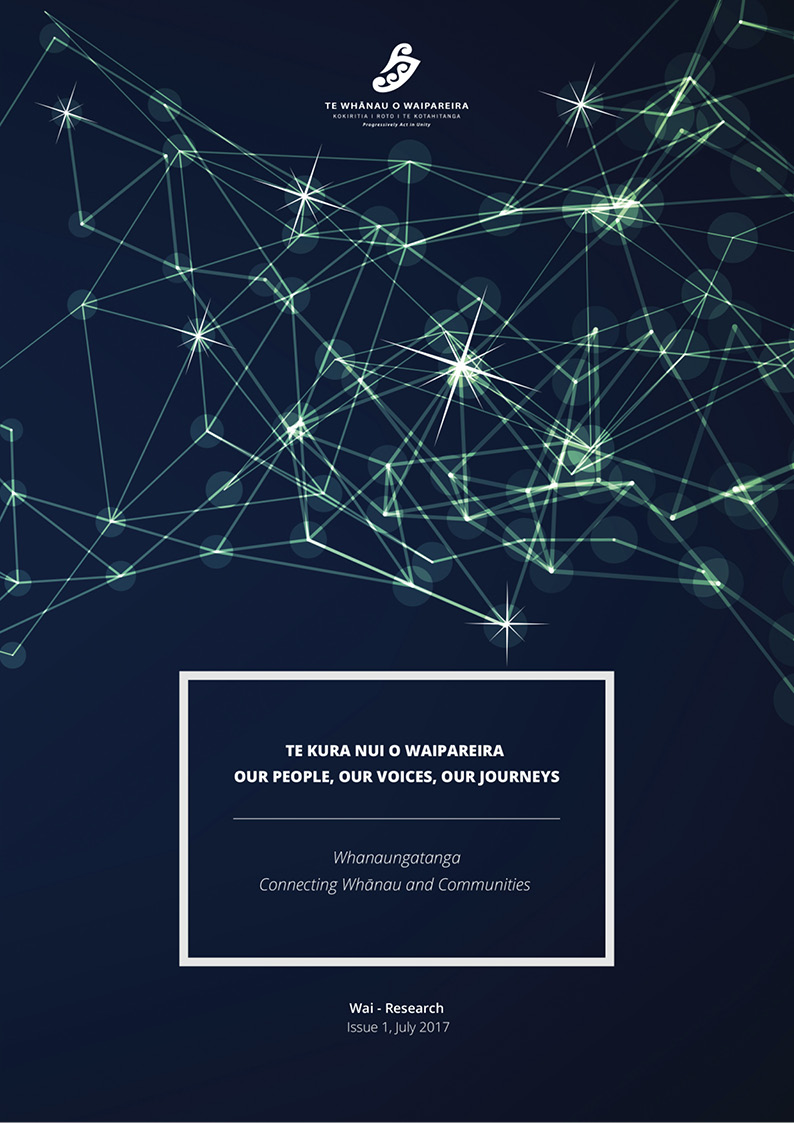 This article discusses the concept of whanaungatanga as central to the research approach and principles the Wai-Research unit—a West Auckland urban Maori community-based research unit, based within Te Whānau o Waipareira. The parallels to Community-based Participatory Research (CBPR) are examined with a core interest in community at the heart of both research approaches, as well as the notion of whanaungatanga being embedded in the relationship between researcher and the community. The specific role Wai-Research has in serving an indigenous urban community is considered in the approach it has developed, specifically a Kaupapa Māori research lens which further gives a legitimate role to whanaungatanga in practice, as a way to overcoming oppressive traditional research practices and in giving voice to and benefiting the community. Whanaungatanga is seen as being naturally located within kaupapa research methods and central to Wai-Research’s development of principles and community research methods to serve its own West Auckland whānau.

This article considers the natural and fluid process of whanaungatanga in practice within Te Whānau o Waipareira’s strategy and innovation unit, Wai-Atami. Whanaungatanga is viewed as an entrenched way of connecting within Waipareira, leading to the development of the “Ngā Hua o Mataroa—Measuring What Matters/Outcomes Management Pilot”, which was developed to understand the impact and outcome of Waipareira programmes for whānau by using whanaungatanga to engage participants and realise strategic goals. Truly engaging in whanaungatanga required an all-inclusive approach from the Trust Board, kaimahi (employees) and whānau. Whānau involvement was facilitated through kanohi ki te kanohi (face-to-face) interaction and hui, leading to 80 whanau participating in documenting their journey on a Waipareira parenting programme and taking ownership of the process. The success of this project includes pioneering outcomes measurement process. The success of this project includes pioneering outcomes measurement with whānau and kaimahi, informing the identification and development of outcomes and tools, and increased understanding and ownership. The key factor to success is authentic whanaungatanga as a standard mode of practice.

This article considers the scope of whanaungatanga within the mental health practice of a Community Support Worker (CSW) working to further a Te Ao Māori framework in social and health services. The article examines how whanaungatanga works in practice and how can it be described to validate the approach to clients and their whānau. A case study of a 30-year-old Māori male diagnosed with Post Traumatic Stress Disorder (PTSD) and Schizophrenia is outlined. The history, services, problems and the changes introduced for the client are reviewed according to the degree of whanaungatanga and how this approach has potentially benefitted outcomes for the whānau member. The changes observed through the documenting of this process substantiate whanaungatanga as a quantifiable outcome. It is concluded that the implementation of whanaungatanga and gathering of evidence is only limited by time, but as the author concludes “is a beginning to an end unseen.”

Te Pou Matakana Collective Impact (TPM CI) is a new and innovative approach to promoting whānau ora (family well-being). It utilises indigenous knowledge and cultural frames to facilitate collaboration across multiple sectors and to ensure that services and support are comprehensive, integrated, and designed to promote the best possible outcomes for whānau. A unique commissioning model has been developed to facilitate this process which places kaupapa Māori at the heart of its activities. This paper draws on the findings from a formative and process evaluation of this approach. It centres on the examination of Te Pou Matakana (TPM) Collective Impact (CI) initiative and examines the key features of its design, development and implementation which have contributed to whānau ora. The paper also argues that Māori cultural values, principles and practices—and long, proud history of social and political advocacy and activism—both support and enhance the collective impact model. To conclude, implications for the future direction of the TPM Collective Impact initiative are discussed.

EXPERIENCES WITH TĀTOU – A PERSONAL JOURNEY

Denise Smith shares her experiences engaging with “#Tātou”, a West Auckland programme that is part of the “Whanau House Collective Impact” initiative, and which promotes a whānau-centered approach to promote physical activity and good nutrition. Each participant is assisted by a kaiarahi (health navigator) who supports them to reach their goals. Denise shares the barriers to her participation, her personal journey with whānau, her resilience in the face of ongoing challenges, and the connections made with others and within herself as a result of whanaungatanga experienced as part of Tātou.

This article discusses the emergence of Social Value Aotearoa in the context of international best practice and the desire to demonstrate the impact of programmes and to create more meaningful outcomes for whānau. The need to account for social value, how it is defined, and developing a common language is discussed as necessary to both understanding the world and to making decisions on where best to invest resources and to rebalance growth within communities.

Growing relationships internationally is seen as essential in the development of Social Value Aotearoa’s confidence and voice as an organisation and in developing its own practice. The key principle for Social Value Aotearoa from the outset has been to involve stakeholders and to design services and products to meet their preferences. The diversity of members locally is acknowledged as a strength in sharing knowledge, building capacity and growing as a movement. The relationships through “connections and engagement—or whanaungatanga— that have been forged to date, both nationally and internationally, are considered key to growing the movement towards social value and towards a world with more equality and a more sustainable environment.

This article examines the key determinants of flourishing (as opposed to languishing) within the context of Māori families. While indicators such as access to housing, education and income are measurable, it is argued that connections to whānau and cultural identity are essential elements in flourishing. The implementation of Whānau Ora has led to a longer-term approach to support services.
In this environment, the test programme Ngā Tini Whetū has been developed to align strategies with whānau aspirations to move self-sufficient whānau into a position of flourishing. The test targeted a small number of whānau within West Auckland, and focused on whānau as carriers of culture, models of lifestyle and as access points to the community, as gateways to Te Ao Māori, as guardians of the landscape and as economic units.

Outcomes are considered in terms of whanaungatanga, kotahitanga, rangatiratanga and pukengatanga. Participants report on their journey and a new commitment to a flourishing future.